We Go This Way 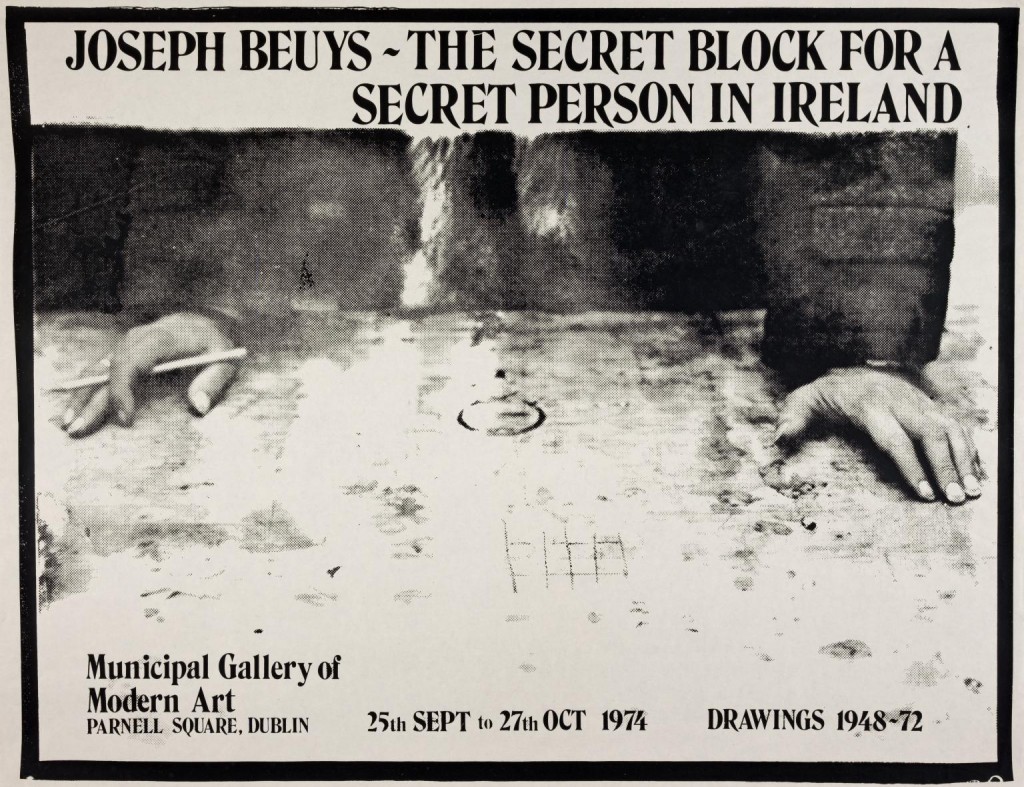 ‘A thinker sees his own actions as experiments and questions—as attempts to find out something. Success and failure are for him answers above all.’ – Friedrich Nietzsche

A few years ago we read a couple of sentences by American author William H Gass we have never forgotten. ‘Nudists,’ Gass writes, ‘get used to nakedness. We get used to murder.’ In the essay it comes from, ‘The Artist and Society,’1 Gass extends WH Auden’s question2 on what role the writer should play in commenting on the political issues of the day to artists. Gass thinks art should not be moral, but says, ‘We live, most of us, amidst lies, deceits, and confusions. A work of art may not utter the truth, but it must be honest. It may champion a cause we deplore, but like Milton’s Satan, it must be in itself noble; it must be all there. Works of art confront us the way few people dare to: completely, openly, at once.’

We were thinking of the Gass quote as we walked around the Art of the Troubles exhibition3 in Belfast. One of the first things it confronts you with is a small bronze by County Down Surrealist FE McWilliam, Woman In a Bomb Blast (1974). We’re told McWilliam had never used his work to make any sort of a political comment before the bombing of the Abercorn Tea-Rooms in Belfast in 1972, an attack that killed two women and left 130 people injured with mostly limb and eye traumas. The sculpture captures a woman frozen in the moment of the blast, legs akimbo and face obscured, the male gaze interrupted.

In 1974, the same year McWilliam cast his Belfast woman, German sculptor and conceptual artist Joseph Beuys came to Ireland looking to establish the Free International University in Dublin. Beuys, whose dictum was ‘Jeder mensch ist ein Künstler’ (‘Everyone is an artist’), saw art as a social process and advocated dialogue as a path to resolve differences. He delivered a series of lectures (he called them ‘actions’) the length and breadth of the country. Writing on blackboards, or table tops where none were available, the artist was present in the works, his journeys often taking him away from the perceived centres of contemporary art. (There’s an anecdote that the artist, facing an audience of only two nuns and one passerby in Limerick, turned to photographer, collaborator and travelling companion Caroline Tisdall and complained, ‘Why have you dragged me off the ends of the earth? Fame in the art world only extends so far!’)

Known for his felt sculptures and fat chairs—deeply allegorical memory pieces rooted in trauma—Beuys was an artist not unfamiliar with controversy: he had been a member of Hitler Youth in 1936, volunteered for the Luftwaffe in 1941 and was shot down on the Crimean front, where he claimed he was saved by Tartar tribesmen who swaddled him in animal fat and felt to keep him warm. He was also the first German artist to enter (and lose) a competition for a monument to Auschwitz.

And so Beuys drew attention to the political ills in Ireland through artworks like Battery (1974)—a bundle of Guardian newspapers bound in twine and painted with a Braunkreuz,4 a report of an Arab hijack beside a headline ‘tough laws against the IRA’—Northern Irish Tongue (1974)—a negative image in which Beuys appears shot through the head with a fragment of a post-explosion Belfast brick—and Brain of Europe (1974)—a hearth slab with the outline of Ireland he inscribed with the names of organisations across the political landscape.

Beuys intended his work to be redemptive and transcendent, and while he saw Ireland as a place with conflicts in need of healing, its recent history of sectarian violence wasn’t the only draw: Beuys also engaged because of its Celtic mythology5, its ancient traditions of scholarly learning and his own fascination with linguist freedoms he saw in the writings of James Joyce.

Joseph Beuys relished the fact their surnames rhymed, and in the autobiographical text Life Work/Course Work (1964)—a ‘self-consciously fictionalised account of the artist’s life, in which historical events mingle with metaphorical and mythical’—Beuys writes of reading Finnegans Wake (which he wished to ‘do’ again), and extending Ulysses by two chapters (as drawings), claiming it was at the author’s request.

Christa-Maria Lerm Hayes6 observes that almost every page of one of two copies of Finnegans Wake in the Beuys estate is annotated, the Anna Livia episode especially. The artist later named one of his multiples Not By Joyce (1984), and referenced Leopold Bloom’s breakfast in Art-Rite (1981).

Joyce remained a vital figure for Beuys, for both his use of language and stylistic approach to narrative. Dorothy Walker, then art critic of Hibernia who was also helping Beuys found the FIU, noted ‘it was Joyce’s revolutionary and disrespectful reinvention of mythology, both Celtic and Greek, that spoke directly to Beuys. Creative subversion is the key to all art that expands perception of reality; in Ulysses Joyce stood Greek mythology on its head in a most irreverent, witty and moving fashion, while reintroducing its relevance to the contemporary world.’7

Sean Lynch, whose work will be presented at the 56th International Art Exhibition in Venice 2015, has been applying what he calls ‘Walter Benjamin’s subtle notion of ‘revolutionary nostalgia,’’ to discarded fragments in the Irish historical landscape, contextualised in a modern context. His excavations have ‘uncovered’ the forgotten stories, lesser known tales such as the ‘missing’ Flann O’Brien monument (a bicycle, what else?) on Ireland’s highest peak Carauntoohill, County Kerry, and Dana’s return from her Eurovision win and the subsequent riot in her native city of Derry, repurposed and retold in the pieces Dear JJ, I Read With Interest… (2006) and Dublin Airport 23 March 1970 Approximately 5pm (2006). ‘While the Eurovision is considered a kitsch occurrence,’ Lynch says, ‘its origins as a post-war attempt to have Europe sing in harmony seems to have a kind of genuine sincerity when collapsed onto the Troubles in Derry.’

Lynch traces modern-day shaman Joseph Beuys’ journey through Limerick (debunking a few myths along the way) in Beuys (Still A Discussion) (2007). The pieces include a reconstruction of Beuys’ Irish Energies (1974)—briquettes of peat compressed into geometric forms and filled with Kerrygold butter—and transformation of the original signage from the Carnegie library where Beuys spoke to spell Beuys on the gallery wall, the excess letters piled like a cairn underneath. Emails from Oliver Dowling, then exhibitions officer at the Arts Council, also form part of Lynch’s gesture to Beuys. In them Dowling says, ‘I remember a successful and lively evening. My recollection is that it [the Limerick exhibition] was respectably attended and I could never understand Caroline Tisdall and her claim.’

As Lynch has said, it’s exotic to think of one of the most famous artists of the second half of the 20th century visit Ireland during the darkest days of the Troubles. But there he is, captured in Tisdall’s photographs8 in his felt hat and long fur coat: there’s Beuys striding the Giant’s Causeway in County Antrim, walking the streets of ‘Free Derry,’ County Londonderry, propping up the library in Limerick. There’s Joseph Beuys gazing out over James Joyce’s ‘snotgreen sea…scrotum tightening sea’ as he uses the urinal near the Martello Tower in Sandycove, County Dublin, his pilgrimage, forty years ago, to the setting of the opening pages of Ulysses. ‘Caroline Tisdall—we go this way.’

1. From Fiction and the Figures of Life, William H Gass, Nonpareil Books, 1971] ↩
2. Auden’s answer: none – ‘literary talent and common sense are rarely found together;’ Gass’ answer: ‘The aim of the artist ought to be to bring into the world objects which do not already exist there, and objects which are especially worthy of love…Works of art are meant to be lived with and loved, and if we try to understand them, we should try to understand them as we try to understand anyone—in order to know them better, not in order to know something else.’↩
3. Art of the Troubles, Ulster Museum, Belfast, 11 April-7 September 2014↩
4. A medium named by the artist, that translates as ‘brown cross’↩
5. Joseph Beuys and the Celtic World : Scotland, Ireland and England, 1970-85, Sean Rainbird (Tate Publishing, 2005)↩
6. Joseph Beuys ‘extends’ James Joyce’s work,’ Christa-Maria Lerm Hayes (Circa, Issue 104: Summer 2003)↩
7. Joseph Beuys and Ireland 1974-1984, Dorothy Walker (unpublished, 1992). Quoted in Sean Rainbrid’s Joseph Beuys & the Celtic World↩
8. Joseph Beuys: We Go This Way, Caroline Tisdall (Violette Editions, 1998)↩