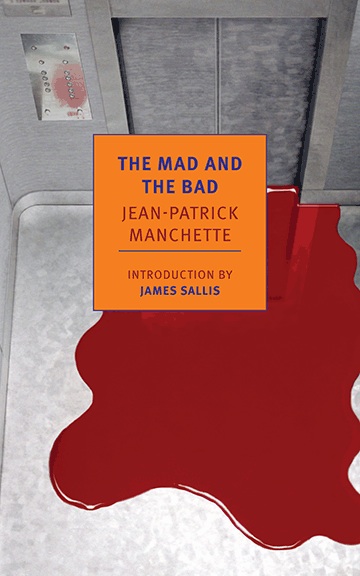 There can never be spoilers for a Manchette novel, since all the characters are already dead anyway.

2. He grasped the young woman by the elbow and towed her towards the door.

7. Stiff-backed, glass in hand, he left through the side door, and Julie hesitated for a moment before pouring herself a brandy, which she downed, standing, in a single gulp, reminded of a time when, freezing cold at dawn, she would stand at a bar and wash down black coffee with four shots of calvados at the start of a day of wandering, tears, fatigue, and despair.

10. She could not quite believe the evidence of her senses.

14. She grasped the MAB in the inside pocket of his pea jacket and fired a shot through the young man’s body.

17. Then he walked briskly to his Rover and drove off.

18. Less than an hour later the 204 took the Autoroute du Su at Courtenay and headed in the direction of the Mediterranean.

19. The brothers emptied their glasses and got to their feet.

20. At that moment a black Simca 1500 passed by, and through its open back window Julie saw Coco looking straight at her.

22. “About time too!” said Julie, and a bullet passed through her right arm.

23. Thompson was doubled over with laughter.

25. At that moment the cafe’s owner crossed the terrace in three strides and emptied both barrels of a shotgun into Nensse’s ear.

26. Then he went and sat in the car and waited for nightfall.

27. She was driven on by a single idea: a hundred meters, fifty meters from where she was now, once past the foot of the mountain, there would be nothing ahead but a vast carpet of grass and flowers, and upon it would be the Moorish Tower, where Hartog was waiting for her.

28. The driver shrugged, stuck his hands in his pockets, and let his gaze wander over the Mediterranean, which was slapping at the pebbles below the deck.

29. Julie tried to step back and felt herself falling.

30. But the idea of catching an animal and – yes – breaking it was perhaps a temporary solution, a way of countering his lack of appetite, and of surviving for a little while, yes.

32. One got the impression that he would not be able to stop.

33. A hundred meters away, Peter was playing in the flowers and shouting for joy.

34. Hartog looked at Thompson as if the man was out of his mind.

36. During this time, in the labyrinth, Julie was sleeping peacefully.

37. Instead of hitting the boy exactly in the middle of the face, the round tore off an ear.

38. At that moment Julie appeared behind the killer and plunged her carving knife into his lower back.

40. Then all movement ceased.

41. He went off to play cowboys and Indians.

ABOUT THE AUTHOR
Brendan C. Byrne‘s criticism appears in Rhizome, and his short fiction has appeared in Flurb. A novella, The Showing of the Instruments, was published in 2010.