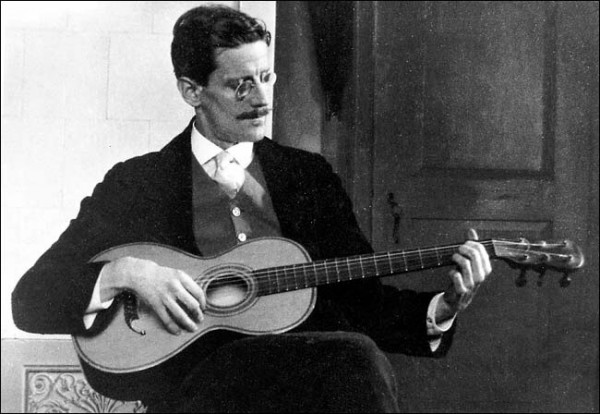 In ‘Re-Joyce’, Darran Anderson talks about how books change as the reader does, how some are best read with wisdom, others in the “full incandescent stupidity of youth”. “The best,” he says, “somehow change continually.” He mentions James Joyce‘s Dubliners, specifically ‘The Dead’, and how much it had changed from how he remembered it, in particular, that last paragraph.

A few light taps upon the pane made him turn to the window. It had begun to snow again. He watched sleepily the flakes, silver and dark, falling obliquely against the lamplight. The time had come for him to set out on his journey westward. Yes, the newspapers were right: snow was general all over Ireland. It was falling on every part of the dark central plain, on the treeless hills, falling softly upon the Bog of Allen and, farther westward, softly falling into the dark mutinous Shannon waves. It was falling, too, upon every part of the lonely churchyard on the hill where Michael Furey lay buried. It lay thickly drifted on the crooked crosses and headstones, on the spears of the little gate, on the barren thorns. His soul swooned slowly as he heard the snow falling faintly through the universe and faintly falling, like the descent of their last end, upon all the living and the dead.

It’s a stunning paragraph, one where “the repetition of the phrase and the reversal of the syntax are disturbing and create discord at the very climax of the rising hymn,” writes David Shields.

Perhaps Joyce engages in self-parody when, toward the beginning of ‘The Dead’ he writes: “The piece ended with a trill of octaves in the the treble and a final deep octave in the deep bass,” for is not the conclusion of ‘The Dead’ written in the mock-epic key of a final deep octave in the bass? The highly rhetorical last page-and-a-half is traditionally interpreted as Gabriel’s unambiguous, transcendental identification with universal love and human mortality, but it seems at least possible to read the conclusion of the story as exaggerated alliteration, as an overwritten passage that conveys emotional deadness taking its last refuge in sentimentality […] Sheer language overwhelms, sound drowns out sense, and incompletion lapses into bathos.

The James Joyce Centre are having a ‘Dead Weekend’ in January 2014.

To kick off the centenary year of James Joyce’s Dubliners, the James Joyce Centre is hosting a long weekend of events celebrating ‘The Dead’ from 4-6th January 2014. Featuring talks, workshops and entertainment inspired by one of the finest stories in the English language, the weekend will culminate in a dinner inspired by that served by the Morkan sisters on Sunday 5th January and closes with a talk by Professor Declan Kiberd delivered on the Feast of the Epiphany, Monday 6th January. Places for the weekend are limited so early booking is strongly recommended.