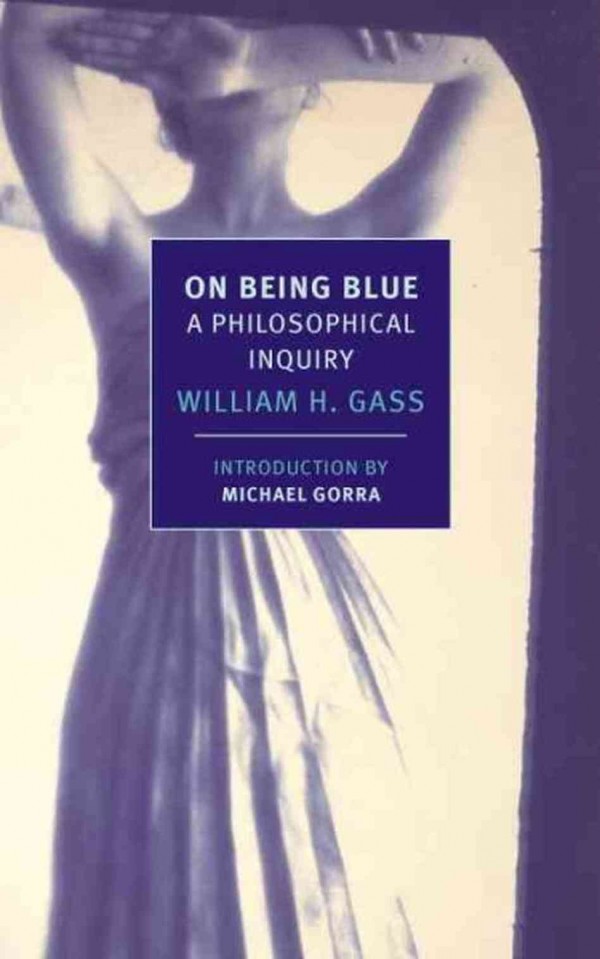 It is almost four months since I suggested reviewing On Being Blue for gorse. I would like to apologise for the delay in getting back to you. I’m afraid that, due to circumstances I did not foresee, I will be unable to write the review. It isn’t a question of time. About half-way into On Being Blue, I began to understand the literary significance of its author, William H. Gass, whom I confess I had never read before. It no longer seemed appropriate to treat On Being Blue in isolation, so I worked my way through most of his other collections of essays and stories, many of which, I noticed, were in the process of being reissued as the author approached his ninetieth birthday. (‘William H. Gass is preparing for death,’ I wrote in an early draft that never issued so much as a second line.) I spent a lot of time with him, returning often to On Being Blue. I even read his final hulking novel Middle C. The title of that book is interesting. It refers not just to the note in the middle of a musical instrument’s range, as suggested by the single piano key on the cover, but to the grade given in school to signify the mediocrity of its recipient. I just don’t want to be that guy.

I’m not sure how much you know about On Being Blue. Maybe you’ve read it. In case you haven’t, I’ll just say it’s a short book, first published in 1976, that attempts to make a general point about the malleability of language by considering the many ways in which we use the word ‘blue’. ‘Blue pencils, blue noses, blue movies, laws, blue legs and stockings,’ Gass opens, and fifty pages later he’s still at it: ‘Blue Boy is the popular title of a painting by Gainsborough, the name of a prize hog in State Fair, and the abscess from a venereal disease.’ ‘Blue’ appears in slang and colloquialism more often than almost any other word. According to Farmer and Henley, whose book on slang Gass quotes, ‘it defies all attempts to trace the why and wherefore of many of the turns of expression of which it forms a part’. Perhaps I’m missing something here – something may have crossed my mind eventually – but I can’t see how a review of this book could make anything of these frenzied lists of inexplicable blues, pleasurable though they are, except to identify notable omissions, cultural differences, etc.

What I’d planned to do instead was focus on those moments when the book slows down, catches its breath and tries to think not of blues, but about blue: as a concept, as a category and even – my goodness – as a colour. But the thing is, when Gass considers blue as a colour, suddenly the text is filled with Plato and Aristotle, with Berenson, Berkeley and some Scot called Thomas Reid. I spent four years of a philosophy degree privately saying nothing about these guys at length; now is not the time for me to start saying nothing about them in public. I am not a philosopher, or a physicist, or even a thinker, and it was not until I’d papered over these failings with a soft-focus image of myself as a writer – a writer of artful non-fiction prose – that they ceased to be a source of despair. I’m aware that the distinction is uncertain at best, but it is still very important to me. If it’s alright with you, I’d rather not let a little piece on William Gass expose it.

To be fair, On Being Blue isn’t all philosophy. If there’s a single blue to which the book devotes itself above else, it is the blue of erotic and pornographic writing. Gass says it disrupts the form. He says few do it well. He says ‘anyone who attempts to render sexual experience directly must face the fact that the writhings which comprise it are ludicrous without their subjective content’. He laments the limitations of the language of sex. ‘We have a name for the Second Coming but none for a second coming,’ he argues, in what is perhaps the most limited line in the book. A few years ago, I thought about writing an essay about contemporary male novelists who, unsure of how to represent female beauty, make automatic appeals to their character’s cheekbones – or, the ‘zygomatic arches’ as Jeffrey Eugenides admiringly refers to them in one novel, like a tourist in town for the weekend. It seemed to me then that novelists had started talking about women as if they were feats of architecture (a subject about which they seemed to know still less). It will not surprise you to learn that I never wrote the essay. Still, when Gass suggested that almost every English poet ‘enjoys describing women as if they were fields awaiting subdivision’, it felt like I might have something to work with. My marginalia says: seek out old notes on women as architecture.

In the end I didn’t bother. See, several pages later Gass argues that ‘the true sexuality of literature – sex as a positive aesthetic quality – lies not in any scene and subject […] but in the consequences on the page of love well made – made to the medium which is the writer’s own’. This is the heart of On Being Blue, the point to which Gass has been arriving at length. No review could omit it in good conscience, and this is what worries me. My review would have no choice but to imply that I am making love to language too. This will not do. I am a writer, I know. A writer of artful non-fiction prose, I know. But I am also out of practice. Frankly, I am in no shape to be making love to anything in public. It has been over seven months since I went longer than 300 words. I’ve been busy, it’s true, but I have nonetheless managed to keep up with those hackish little forays you sometimes see in the back of papers and magazines. It’s something I’m beginning to worry about. I’ve grown too accustomed to these short unconsummated affairs, all full up with exaggerated praise or criticism, each one told in a style developed to suggest I’d have so much more to mouth if only this unforgiving word count would let me finish. It’s a curfew I pretend to hate but don’t, or don’t anymore, and while I don’t feel great about – feel perfectly blue, in fact – I don’t think I should break it until William Gass is out of sight, and mind, and bed.

Because I’d end up trying to copy him. I would. ‘Bad writing is more contagious than a cold,’ Gass says in ‘Exile’, but I reckon good writing is responsible for at least as much bad writing as bad writing. And there is a lot of it here, a lot of dangerously good writing. On Being Blue is not simply an argument about language. It is a list, and lists – as Gass writes in his 1986 essay on the word ‘and’ (yes) – ‘lists are fields for words’. On Being Blue enacts its argument. Its call for sexual sentences is made by sexual sentences. Listen in: ‘There are whole schools of fish, clumps of trees, flocks of birds, bouquets of flowers: blue channel cats, the ash, beech, birch, bluegills, breams, and bass, Andalusian fowl, acaras, angels in decorative tanks, the bluebill, bluecap, and blue billy (a petrel of the southern seas), anemone, bindweed, bur, bell, mullet, salmon, trout, cod, daisy, and a blue leaved and flowered mountain plant called the blue beardtongue because of its conspicuous yellow-bearded sterile stamens.’ I’ll spare you the blow-by-blow equivalencies of an overworked metaphor, and instead say just that here, as elsewhere, Gass achieves ‘not the word made flesh’ but ‘the flesh made word’. At last, On Being Blue is a field for Gass to fuck in. And though it’s great to watch him go and come, I’d rather keep my distance; and though most reviewers’ work is missionary, still I’d rather keep my distance.

Somewhere in the middle of On Being Blue, Gass notes that ‘any author’s wisdom consists of the correct assessment of his own weaknesses and the discovery of the technical ways to circumvent them’. I thought about this for a long time. I even made a list of weaknesses, of which this email is a truncated version. Perhaps I’m being unimaginative, but I have found no way to circumvent them, and by now I’m tired of looking. None of this is intended to justify not writing the review, Ms. Tomaselli. My apology stands, sincere as ever; I hope you can accept it. I understand that you’re trying to run a serious publication, and I appreciate that it must be very annoying when writers neglect to honour promises. I intend to be more cautious with my pitches from now on. Still, I hope we can work together sometime in the future.

Kevin Breathnach is a writer and critic whose work has appeared in The New Inquiry, The Irish Times, The Stinging Fly, Totally Dublin and elsewhere. His essay on Henri-Cartier Bresson, ‘Various Assumptions, The Still Lives of the Artists,’ is in issue one of gorse. He lives in Dublin.