The first image was a means of rendering visible a presence, of which I have aware of all my life, in whose comforting solidity the anguish of inception had crystallised. While my memory of this presence has remained affectionate — as a child crying in the dark the lush pink folds had sustained me, kept me protected from the truth and shielded from all that was real — there was, somewhere along the line, a shift in consciousness, like something down on all fours, craven and inhuman, drawing itself up off the floor to an intractable conclusion.

As an attempt at alleviation, the second image was an unmitigated triumph. I had learned the value of evasion. I had cultivated an ability to see both sides. The rift that had festered within me had begun to heal and I was ready to take on the world. In negotiating the dismantling of the rigorous intellectualism which had stifled my emotional life I had seen wither the fatuous humanism that had held me captive, the polluted dreams within which I had tried fitfully to reach out. But in the throws of my haste, my ability to act had calcified into the view from a gilded cage. How smoothly the fingers that had folded themselves around my eyes had given way to mounds of glistening flesh. Bodies, which in their aiding and abetting of my lurch to freedom had once floated freely upon a sea of shimmering lights, now smeared their tangled entrails across the underbelly of my altruistic discretion, obscuring the crimes in which I had become complicit, the reality of my life, locked in perpetual congress, hand in counterfeit hand with a torrent of rapacious depictions.

It became clear to me that all my attempts at escape had been self-defeating. My pursuit of obscuration was merely another means of upholding a disingenuous status quo. Had I known the second coming would have turned out to be so disastrously inexact I would have stayed with my beginnings, which although the source of countless woes could not compare to the tyranny of this subsequent reflection. Had I dreamt that such vague, outlandish incomprehension would be a source of inspiration, I would have let the folds that had once comforted me fall across my mouth and smother me at birth. How mistaken I had been. How deluded. To have brought such misery upon the heads of those I loved. I prayed for this reflection’s obliteration, for the reinstatement of the hands that blind, and whose grip, however tightly fastened across my face, could not compare to the stranglehold such ethereal formlessness was capable of exerting. What was needed was some form of aspiration in the ruins of which the flames of my contrition could burn anew, and in which others might see, as through a glass darkly, individual redemption as the apoptosis of collective defeat. It seems that I had not gone far enough in my endeavours, had not been charged radically enough in my approach to understanding the nature of the dilemma, the benefits of visual depravation supplemented by lengthy doses of physical incarceration. I would not fall again into such a trap, would not step so causally into such lurid dreams. Having learned my lesson, I would not be so easily undone.

With the shadows lifted the nature of the world was made clear. For my final, definitive reflection to resemble so tightly the first, to appear similar in every regard and yet, in its propensity for connection, be so radically and inalterably different, represented not only a logical progression, but the culmination of all my years of struggle. My spirits soared and my soul rejoiced in the blindness that settled, imperceptibly, upon me. Steeped in innocent blood, redolent of death and decay, it contained, at its core, the purifying rigour of recapitulation. I was a changed man. There was a spring in my step. A fat cigar was never far from my lips, a glass of brandy never straying for long from my fortified clutches. The surface of the earth, over which my feet had trudged wearily towards the grave, was rejuvenated. Children were held up to my inscrutable gaze. Those who were captured were taught to revere the complexities of the trio, to study its nuances and intricacies, and when the time came, to cast eagerly into its impervious conflagration the remains of their execrable lives. 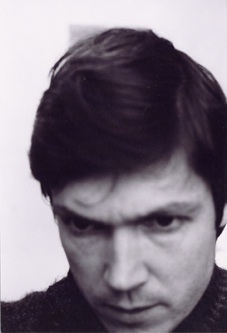 ABOUT THE AUTHOR
Benjamin Robinson is a writer and visual artist. He was born in 1964 in Northern Ireland, and attended, briefly, Limerick College of Art & Design in the 1980s. His writing has been published in Maintenant 8: A Journal of Contemporary Dada Writing & Art, A New Ulster, Suffer Eternal Vol. 1 (anthology, Horrified Press), ART From ART – A Collection of Short Stories Inspired by Art (anthology, Modernist Press), and online at Sein und Werden, Paraphilia Magazine, Paper Visual Art Journal, 3:am Magazine, Honest Ulsterman, amongst others. His artwork has been exhibited in Ireland, the UK and Germany. He lives in Dublin.