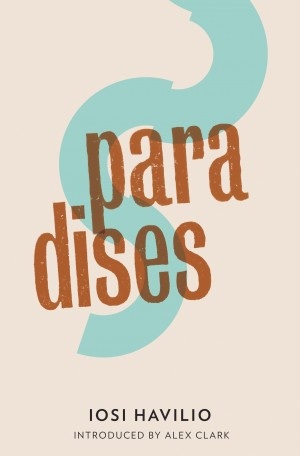 If in recent times the ‘literary’ novel has polarised into two distinct types — the expansive, all-encompassing Jonathan Franzen kind, and the other, more modest variety, slim volumes of spare, detatched prose, like Ben Lerner‘s Leaving The Atocha Station — Paradises belongs firmly to the latter. It follows an episodic structure, and this, combined with the uncomplicated sentence structure of its first person, present tense prose, makes it deceptive in its apparent simplicity.

In short, Paradises does not tick the usual boxes in terms of its structure. The sub-plots and motifs — snakes, paradise, Tosca and the injections, the coincidence of the many appearances of Eduardo Holmberg ‘the man with the library that had the snake book, the man on the statue, the same man who wrote the novel about Martians…’ — don’t add up to much. Rather than rising tension towards a single plot crisis we get a low-grade, sustained anxiety, with the whole novel acting as a form of crisis.

This review has no need for a ‘spoiler alert.’ Almost from the start, we understand that there will not be a big reveal. Ah, literary fiction, we say, a study in character rather than plot. But here too, at least initially, we are stymied, because Havilio does not appear to have any interest in engaging us with his character. We wonder if her passivity can be explained by the shock of her recent bereavement. She is ‘…unable to imagine a way to make money to pay the bills.’ However, quickly we see that this is not a temporary state, rather it is her character: ‘I carry on, to everyone else’s rhythm; this is seemingly what I have to do.” And a protagonist who lacks agency, drifting from one situation to another, can become irritating.

But her voice is nevertheless compelling and often humourous, and it draws us in until her passivity begins to look like a philosophy:

… you can get used to anything. He’s quite right about that, although I don’t know whether it’s more a case of everyone getting used to whatever comes their way, which isn’t quite the same thing.

Hers is a world of squatting and squalour, a marginal existence, where the threat of violence is everpresent, and where morphine and other drugs offer readily available escapes. As she weaves a path through the potential dangers of the city, we begin to see that it is her ability to go with the flow which saves her from collapsing under the horror of her situation. Passive acceptance is her coping mechanism, and perhaps the best way surviving. Thus, she takes up offers of work in the reptile house at the zoo, of accommodation in a half-finished tower block, and of an eleven year old childminder as they present themselves, and they work out.

Or so we are lulled into at least half-beliving. Havilio’s skill lies in seducing the reader into acceptance of a character for whom this reality, filled with uncertainty and danger and snakes, is tolerable. One of the most affecting aspect of the novel is the reality check we get when, occasionally, we remember to hold Havilio’s world up agains ‘normal’, such as when his protagonist leaves Simón with the bull:

He’s a sitting bull. The naked torso, the square head, bushy eyebrows and a mass of tangled hair that couldn’t be blacker. He really is frightening.

Could Simón stay for a while, I have to go out.

And she does, leaving her four-year-old child with this terrifying stranger she knows to be capable of violent behaviour, to go to a party.

It is primarily through language that Havilio achieves the detatched passivity of his character. His style is plain, unadorned, and perfectly suited to his purposes:

I think about everything we said, everything we didn’t, I think about the past, everything that is no longer and never will be again, I think about how each of us had to devise our truth in relation to the other, a comparison of before and after. And that’s the reason for all the affectations, the smiles, the embarrassment, the surprise, the And you? This is mad, and I promise. All those words.

Indeed, often she chooses not to use words at all. When it occurs to her that she might relate all that has happened to her since she last saw Eloísa, she decides against: ‘But I say nothing… I’m about to lie, tell her anything, invent an address, but I come out with a vague remark.’ This is a risky decision for a writer to make about his first person, central protagonist, but it is effective. In the spaces in the narrative, in the silences where another writer might have put dialogue, Havilio makes room for the reader, trusting him or her to interpret his motivations and themes.

Sometimes a feeling of detachment can come about by virtue of a book being in translation, but unless one is able to read the novel in its original Spanish, it is impossible to determine to what extent this is the case. The translator, Beth Fowler, does add a dimension to the novel with some of her decisions, however, such as the words she chooses to leave untranslated: caudillo, and sequidilla (a Spanish dance in triple time; Havilio uses it to describe the rhythm of a series of farts!). For this English-only reader, it does not matter whether the impact of the prose is intrinsic, or enhanced by translation.

Paradises ends at a somewhat random point, leaving Havilio free to pick up again later should he wish to do so, as he did with Open Door. There is little by way of denouement, and we are left to ponder a drawing of a snake as a last chapter. In terms of traditional novel structure, Paradises is unsatisfactory, but Havilio’s novel is not traditional and there is no overarching plot, with its concommitant narrative arc. There are themes running through it, perhaps about the meaninglessness and randomness of life, or about judgment and acceptance, or about the duality of existance, good and evil, Paradise and snakes. Havilio, in an interview, says he sees the world as, ‘…a never ending spiral which I observe upwards, from the bottom. Such an experience serves as an entrance and exit to any story.’

The story is entered and exited on Havilio’s terms. This is a novel which follows its own rules, and it works — on its own terms.

Paula McGrath is an MFA student in UCD. She is working on a novel-in-stories, No One’s From Chicago, and her novel, Michaelangelos, is on submission. Paula’s fiction, reviews and essays have appeared in Mslexia, Eclectica, ROPES Galway, Necessary Fiction and elsewhere.