Prague: Capital of the Twentieth Century 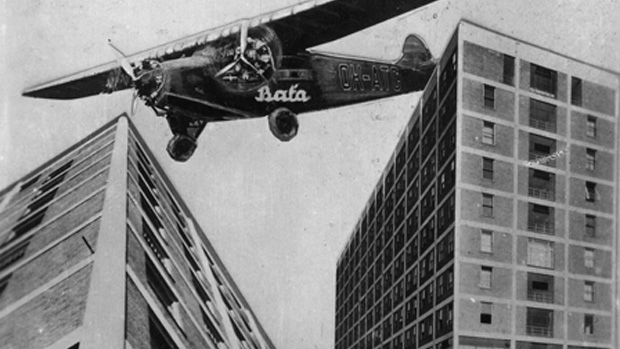 Derek Sayer’s meandering dérive through the hall of mirrors of 20th century European history may prove taxing to the scholar who expects a clearly signposted route, but exhilarating to the intellectual flâneur. The subtitle, A Surrealist History, gives the first enigmatic, elliptical tickle: Is this a book on Surrealism? Is it a book on the Surrealists? Or is it a work of Surrealism in itself? It eludes and elides easy categorisation – by design, for the point of Sayer’s psychohistorical walk is precisely to subver ‘grand narratives.’ With Prague, it seems that Sayer is not only putting a damper on a coherent interpretation of history, but setting fire to the notion of traditional, formal scholarship. Seekers of a chronological or thematic history of Prague should look elsewhere, but anyone wishing to experience an intuitive grasp of Modernism – artistic, literary, political – should buy a ticket and take a seat. In true Surrealist style, this book is a collage comprised of myriad micro-histories. We are seated not in the audience, but at the coffee table of Breton, Éluard, and Nezval, witnessing their comings-and-goings with a curiously warm intimacy that could scarcely be equalled by a conventional historical treatment.

Instead of a site that documents the linear march of time, Sayer’s Prague is simultaneously a concrete centre of artistic commerce, and a montage of mutating identities. The conception of reality and self as ever-changing tricks of the light is one that resonates throughout much of Sayer’s work. For him and the Surrealists, all times are the same time; all things are transformed. Tom Stoppard, Toyen, and Apollinaire metamorphose from their Czechoslovak roots to become citizens of Surrealism; place names are subject to the tides of fashion and politics, making a joke of historical continuity.

Sayer’s allegiance to postmodern theory helps explain why he so fervently renounces the grand narratives of modernism and postmodernism. For Sayer, meaning is lost in a protean sea of semiotics; ‘shifting markers’ of self and other, where the (Lacanian) self does not exist except in language. Kundera’s ‘semantic river’ is certainly one in which Sayer likes to splash around. Little wonder, then, that he finds so much to appreciate in the Surrealist movement, which insisted on the plasticity of reality and the intimate individuality of meaning. Why not a pair of eyes instead of breasts? Why not a feather instead of an axe? Why not a furry teacup? Nothing is sacred, because to name something sacred is to pass judgment – and judgment is something of which this work is largely free (except in its rejection of grand narratives). Thus the author is able to explore the full texture of history with its high-contrast chiaroscuro lighting; the Brutalist sits unashamedly next to the Baroque; Terezín and Auschwitz next to Vyšehrad and the Vltava; Hitler’s apartment next to the Grand Orient Cafe. Even a pun describing the creative energy of confined Jews in Terezín as ‘one of the greatest concentrations of artistic talents in Europe’ loses its contentiousness, precisely because Surrealism ushers us into the theatre of the absurd. 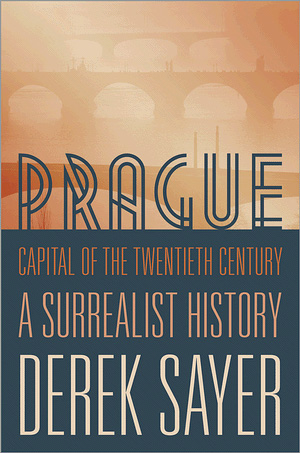 Sayer often visits other places in his exploration; in fact, often he leaves Prague for sections at a time, following the stories of his players until he finally hitch-hikes back to that nexus of activity. But this, too, is part of his charm. Reading Prague, we cannot help but surrender to Sayer’s relief at slipping the shackles of academic structure. Indeed, Sayer has contrived to allow the message to mutate the medium: the rigidity of any one interpretation of history is enforced first and foremost by its structure. By avoiding structure, Sayer avoids singularity of meaning – resolving what he himself names ‘the problem of form.’ And yet, in spite of the danger of falling into an unintelligible mess of anecdotes, by the end of the book an image, made of many small images, begins to emerge.

The small concession that Sayer makes to form and structure is to seed the rest of the book into his introduction, but it is not until later that it starts to make sense, and the lack of structure is initially hard to penetrate. This is a matter of conditioning as much as anything else, since the mind, academic or otherwise, is used to finding a point. Just as Kupka once asked, ‘Must then a work of art represent something?’ so Sayer implies the question, ‘Must a piece of scholarship have a form?’ He lets the events speak for themselves, exploiting oblique connections between places, people, and events – connections that are at their most entertaining when they are their most tangential. Sayer has an admirable eye for (sometimes excruciating) detail; coupled with occasional glimmers of wry humour, this produces an intimate and absorbing experience while slowly, unobtrusively deconstructing the reader’s understanding of history. Following Walter Benjamin’s conception of history, this work is ‘not progression, but image, suddenly emergent,’ a timeless phenomenological utterance. In reference to two other ‘non-linear’ works, Sebald’s Austerlitz and Weil’s Barvy, Sayer speaks of narrative emerging from circlings, from repetitions; it is ‘a compulsion until the reader is held fast in a net of interwoven images, unable to look away.’ His Prague is woven around the reader slowly and silently, page by page, until we cannot help but be made aware of the final image – neither beautiful nor ugly, but undeniably real.

ABOUT THE AUTHOR
Esther Galfalvi is a plain-clothes classicist living in London. Her work also appears in Dante Magazine.