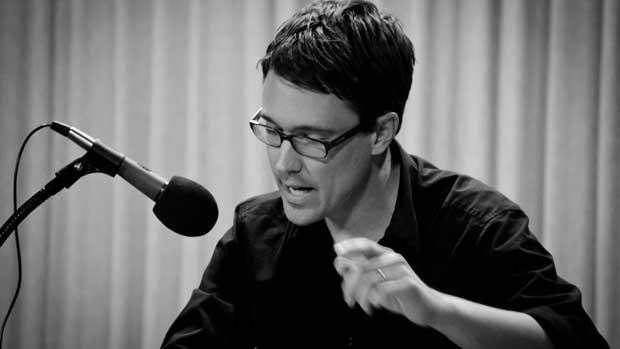 On the strength of two short books – each slim enough to be read in a single sitting — Evan Lavender-Smith has established himself as one of America’s leading literary artists: a writer whose work reconfigures the relations between fact and fiction, form and content, writing and reading. Not only this, but Lavender-Smith speaks as much to philosophers as to lovers of literature. His books have been copiously praised by some of the most pioneering voices in contemporary fiction (Gary Lutz, Brian Evenson, Michael Martone) and by prominent scholars of continental thought and critical theory (Clare Colebrook, John Mullarkey, and Ian Buchanan, among others). Lavender-Smith’s first book, From Old Notebooks (BlazeVox, 2010; Dzanc, 2012) presents a constellation of self-reflexive fragments — scattered thoughts on writing, thinking, and the comic chaos of family life — that combine to create a vivid, living literary meditation, reminiscent of Montaigne and David Markson. His second book, Avatar (Six Gallery Press, 2011) treads strikingly different territory: recalling Bernhard and the late works of Beckett, this grief-crazed monologue gives us a glimpse of life at its limit, stranded in space, left only with tears, stray strands of hair, and degraded memories for company. Taken together, these two texts testify to a level of intellectual and aesthetic adventurousness rarely seen in recent literature. Evan and I corresponded by email throughout September 2013, in a conversation that ranged from the legacy of modernism to the vital importance of style and form for both literary and philosophical writing.

David Winters: Forgive me for beginning with some fairly broad brushstrokes. Reading both of your books together, my first instinct is to try to make comparisons between the two. This may be a mistake on my part (I’m not sure why two texts’ shared authorship should automatically make them candidates for comparison) but perhaps there are commonalities. For instance, both books present what we could call the “rhythm of thought”. But each book is driven by a different rhythm—most rudimentarily, that of the fragment on the one hand, and the unbroken monologue on the other. So, to start with, I’m interested in how you conceive of the relationship between these two modes, and the capacity of each to reflect (or rather, produce?) “thought”…

Evan Lavender-Smith: It seems that my own thought often proceeds in one of those two ways, either in the mode of the concise fragment (e.g. “Need eggs”) or in the mode of the excessive interior monologue (e.g. “Eggs eggs Walmart today tomorrow eggs must buy them don’t forget the eggs …”). I’ve spent a lot of time trying to really think about the way I think, but I’m still not sure that I have a very good handle on it. I listen to myself think; invariably I forget what I’ve heard, so I return to the most basic questions. Do I think in words? If so, what type of syntax is involved? These are the simple, first-order questions; it gets trickier when the relationship between thought and writing is introduced. How is (or isn’t) language/writing commensurable to thought? What might a formalist representation of thought look like, in contrast to a realist representation of thought? That last question has particularly interested me, the possibility of non-realist literary forms reflecting the hidden or forgotten rhythms and syntaxes of thought. As to your point about the literary mode producing rather than merely reflecting thought, yes, of course, at a certain point it’s six of one, half a dozen of the other: I perceive my words and sentences feeding off other words and sentences in the same way I perceive my thoughts feeding off other thoughts; I intuit a certain immanence about content, as determined by form, just as I perceive a certain immanence about thought, as determined by the body. I don’t know that the language’s self-generative ability is any more marked in the fragmentary mode as it is in the monologic mode; it seems to be a fundamental feature of both modes, or of any mode in which I write, including the rambling mode of the answer to the interview question.