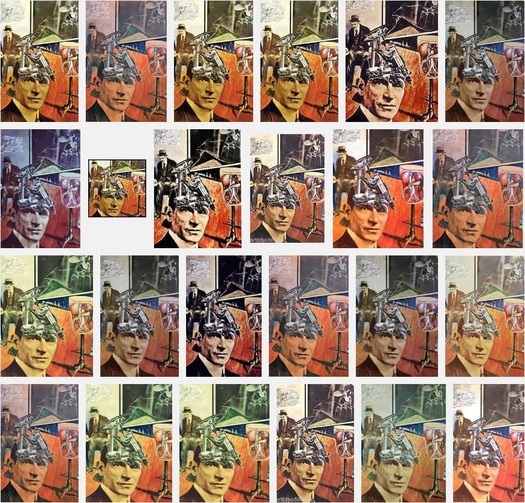 Rick Poynor on Raoul Hausmann, collage (‘the most important innovation in the art of the twentieth century’) and Pinterest.

But Tatlin at Home is a historical artifact, not a throwaway image, so which pin was the most accurate as a representation? There were large differences in color and small but nagging variations at the edges of the image. The right-hand edge seemed particularly unlikely in all the pins I looked at. Having cut out the dressmakers’ dummy containing body organs and the fire extinguisher underneath, why would Hausmann then choose to slice and crop them so awkwardly? On the other side of the collage, the man’s hand and foot comes and goes and the crop on the ship’s propeller at the top also varies. Not for the first time it seemed I would have to leave Pinterest to find the most reliable online source and with art, as a rule, this tends to be the museum that owns the piece. Before doing that, I consulted some books, seven in all, that reproduce Tatlin at Home. From William S. Rubin’s Dada & Surrealist Art (1968) to Dawn Ades’ Photomontage (revised ed. 1986), it became clear that in the original the complete edge of the dressmakers’ dummy could be seen, as well as most of the fire extinguisher (though both of these older reproductions are in black and white).