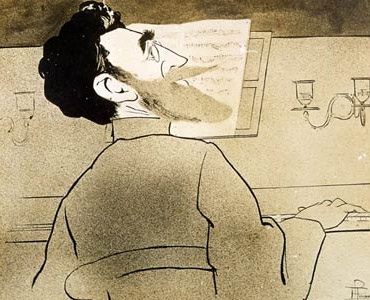 The final key to Satie’s work is the idea of Repetition. In 1949, John Cage went to Paris to find out more about Satie’s music (apart from a few cognoscenti, Satie’s work was unknown at that time) and one of the pieces he discovered was entitled Vexations. Played through once, this rather innocuous piece made up of 36 diminished and augmented chords lasts no more than 2-3 minutes, but Satie had set a trap for the performer by saying that the piece should be played 840 times in succession. To do this, he said, ‘it would be advisable to prepare oneself beforehand, in the deepest silence, by serious immobilities’. If you follow Satie’s instructions, the average time it takes to perform the piece is about 24 hours, which is longer than it would take to perform all his other pieces of music put together.

It might seem like a joke, but Satie was deadly serious and the repetitive nature of all his pieces raises interesting questions about the function of boredom in art. Satie said that ‘boredom is deep and mysterious’. Of Vexations, Cage said, ‘The music first becomes so familiar that it seems extremely offensive and objectionable. But after a while the mind slowly becomes incapable of taking further offence, and a very strange euphoric acceptance and enjoyment begins to set in … It is only boring at first. After a while the euphoria begins to intensify.’