Where the Dead Voices Gather

‘Mr Yeats has been speaking to me of your writing.’ In December 1913, Ezra Pound wrote to James Joyce asking permission to include a poem of his, ‘I Hear an Army,’ in the anthology Des Imagistes. Joyce, living in self imposed exile in Trieste and struggling to make ends meet – he had yet to make money from his writing – readily agreed. ‘This is the first time I have written to any one outside of my own circle of acquaintance (save in the case of French authors)… I am bonae voluntatis – don’t in the least know that I can be of any use to you – or you to me. From what W.B.Y. says, I imagine we have a hate or two in common – but thats [sic] a very problematical bond on introduction.’

Joyce sent Pound more work, and Pound, drawn to Joyce’s tribulations with censorious publishers – it took Joyce almost ten years for Dubliners to be published without expurgation – took up the cause. Acting as Joyce’s unpaid agent, Pound used his connections as literary correspondent and editor to shepherd A Portrait of the Artist as a Young Man – as a serialisation in Harriet Shaw Weaver’s The Egoist in 1914 – and parts of Ulysses – first serial publication in The Little Review in 1918 – into print.

‘Enter a skinny, shabby Irishman and a natty, quietly sinister American,’ as Kevin Jackson describes them, ‘hellbent on exploding everything that realistic fiction and Georgian poetry held dear … Language has rebelled against the tyranny of subject matter and character, and become the leading character in its own right. The horror!’

As the ‘unconscious mind, like the city, spends its time recycling events,’ so too did the moderns reuse the ‘debris of previous literature.’ Pound and co. – as Darran Anderson discusses in the opening essay – picked up signals from ancient sources, remaking it new.

‘I want a place I and T.S. Eliot can appear once a month and where Joyce can appear when he likes, and where Wyndham Lewis can appear if he comes back from the war,’ writes Pound to Little Review editor Margaret Anderson in 1917. Those places, the ‘little magazines’ – The Little Review, The Dial, Poetry, Broom, The Egoist and others – were crucial in getting the work of the ‘men of 1914′ (as Lewis dubbed himself, Eliot, Pound and Joyce) in print. Often publishing outside of the mainstream and challenging the very notions of what literature could be, they were the perfect venues for the exiles to explore new modes of writing. More significantly, the little magazines welcomed important work other editors had dismissed or ignored. They fast became hotbeds for innovation in new forms: first surrealism, then modernism.

Their relationship, though, cooled – Pound had no love for Joyce’s new ‘Work in Progress,’ Joyce was alarmed (and rightly so) at Pound’s politics. The reversal of support from a former champion was disappointing, but Joyce was to find other encouragement in American ex-patriates Eugene and Maria Jolas. The Jolas’ transition journal ran extracts from André Breton’s Nadja and the surrealist manifesto ‘Hands Off Love,’ introduced Kafka to an English readership with ‘The Sentence’ and ‘Metamorphosis,’ ran Dadaist work by Hans Arp and Kurt Schwitters, published bits of Hart Crane’s ‘The Bridge,’ some of Gertrude Stein and early Samuel Beckett, and much Finnegans Wake as ‘Work in Progress.’

The frontline of the avant-garde in Paris, transition was the firecracker the middle class, middlebrow, patrons of the arts needed: their 1929 manifesto was incendiary stuff. 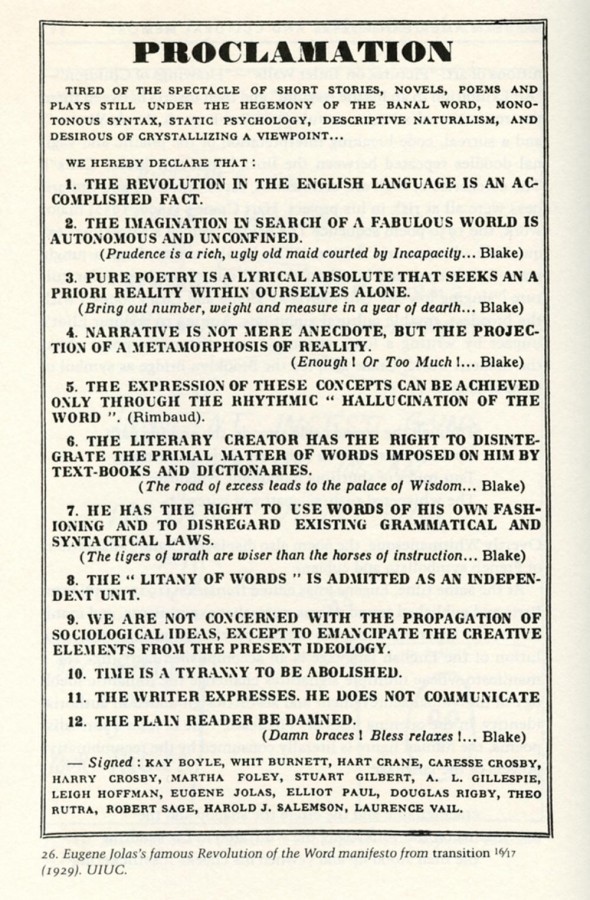 A dismantled syntax, a new multilingual tongue, transition was a perfect fit for James Joyce’s buckled style. ‘The same people,’ writes Peter Conrad, ‘did not think in paragraphs or logical, completed sentences, like characters in nineteenth century novels. Their mental life proceeded in associative jerks and spasms… The modern mind was not a quiet, tidy cubicle for cognition. It thronged with as many random happenings as a city street; it contained scraps and fragments, dots and dashes, like the incoherent blizzard of marks on a modern canvas which could only be called an ‘impression’ because it represented nothing recognizable.’

Joyce, Gertrude Stein and the other transition contributors were employing English in radically new ways, bending and regenerating a language made dull by age and usage. ‘Joyce,’ says Peter Gay, ‘pushed the dissection and reconstitution of prose to an extreme that nobody could surpass without landing in sheer incoherence.’ Finnegans Wake could not serve as a novel for later subversive writers, Gay continues, but ‘it remains – and will remain – a solitary monument to a bold, learned, and unduplicible venture, serving as Joyce always did to affront dominant literary pieties.

One of the finest Irish novels of 2013, Eimear McBride’s A Girl is a Half-Formed Thing, was ignored for nine years, dismissed as being too experimental. English indie publishers Galley Beggars Press took a punt with it and it went on to win the Goldsmith’s Prize, a prize that embraces the enthusiasm of Laurence Sterne – another great Irish innovator – and rewards ‘fiction that breaks the mould or
opens up new possibilities for the novel form.’ Novels that are novel.

Another, Donal Ryan’s The Spinning Heart, a novel in voices, was rejected forty-seven times before being rescued from the ‘slush pile’ by a beady-eyed intern and published to international acclaim by Irish independents Lilliput Press. They – McBride and Ryan, Galley Beggars and Lilliput – are stories of our time.

Donal Ryan has said we are in the eye of a publishing storm; we think he’s on to something. The optimism of the 50s, and the spirit of Ireland’s own little magazines – The Bell, Threshold, Atlantis, The Dublin Magazine – is alive and well in the Dublin Review and The Stinging Fly, and in newcomers The Moth, The Penny Dreadful, South Circular, The Bohemyth. Though the James Joyces, the Ezra Pounds, the Gertrude Steins, the Ernest Hemingways of today would still be deemed uncommercial (well, perhaps not Hemingway), praise be the independents and the little magazines, for giving voice to innovation, for ushering exciting and unusual authors into print.

For all our talk of the ghosts of Ezra Pound and James Joyce, gorse does not wish to raise the dead. We are not nostalgic for the past, but look for the potential in literature today – we believe in the art of words. But we are not only for the novel; we champion the unconventional and the under-recognised, writers exiled in their own countries.

‘I hear an army charging upon the land…’