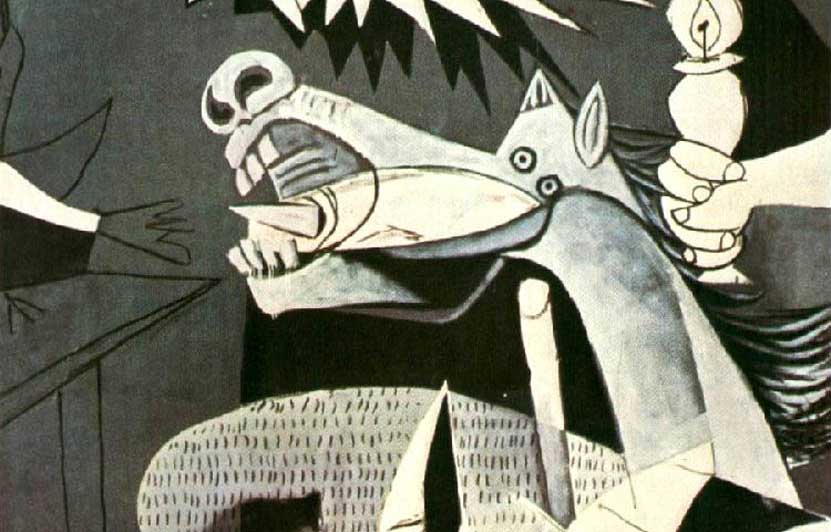 ‘I fear that machines are ahead of morals by some centuries and when morals catch up there’ll be no need for any of it.’ – Harry S Truman

‘The killing machine has a gender, and it is male.’ – Susan Sontag

A 1962 newspaper photograph of a plane crash led Andy Warhol to produce a series which tackled catastrophes and gruesome events. ‘I guess it was the big plane crash picture, the front page of a newspaper: 129 die. I was also painting the Marilyns. I realised that everything I was doing must have been death. It was Christmas or Labor day—a holiday—and every time you turned on the radio they said something like ‘four million are going to die.’ That started it.’

‘Death and Disaster,’ Warhol’s mechanical reproductions1 and repetitions of suicides, car crashes, the atomic bomb, the electric chair, race riots, and earthquakes are memento mori that turn death into a deliberately remote event. Warhol’s 1965 painting Atomic Bomb is not so much a protest, more a description, a silkscreened snapshot of a mushroom cloud in black surrounded by a deep red—it’s aggregated, apolitical, and banal. His negation of experience is taken to its most disturbing point in White Car Burning: an overturned car burns in the foreground, the driver impaled on a pole, arms extending downward and head bent forward, while a pedestrian casually walks away. ‘When you see a gruesome picture over and over again it doesn’t really have any effect.’

‘Art,’ Rachel Kushner says, ‘has complex ties to violence.’ The cover of The Flamethrowers shows a photograph of a woman with her mouth taped shut, an image taken from an Italian radical newspaper. Reno, the land artist in Kushner’s novel, plans to set a speed record on her motorcycle on the Utah salt flats, photographing the tracks she leaves, ‘drawing in a fast and almost traceless way.’ Steadying herself for the trial runs she says, ‘We weren’t waiting to hear the run was routine, that it was solid, that there were no problems […] We weren’t there to see. We were waiting on news of some kind of event, one that could pierce this blank and impassive and giant place. What else could do that but a stupendous wipeout? We were waiting on death.’

Kushner accelerates between the masculine downtown art world of 1970s New York (‘what occurred did so because I was open to it, and not because fate and I met at a certain angle’)—that of Robert Morris, Richard Serra, refugees from Warhol’s Factory—to the radical Red Brigade in seventies Rome, and backwards to World War One Milan and motorbike manufacturer TP Valera, ‘a youthful recognition that vital life was change and swiftness, which only revealed itself through violent convulsions,’ an echo of the barbaric yawps of Italian Futurist FT Marinetti. ‘My book is partly about insurrection,’ Kushner says. ‘Fire is a powerful form of transformation and change.’2

Marinetti’s First Futurist Manifesto appeared in February 1909 on the front page of Le Figaro in Paris. Arguably the beginning of the very idea of the artists’ manifesto. It was incendiary stuff exalting technology, the modern machine, audacity and the ‘beauty of speed,’ ‘speed finally gives to human life one of the characteristics of divinity: the straight line.’ ‘A race-automobile adorned with great pipes like serpents with explosive breath,’ he proclaimed, ‘is more beautiful than the Victory of Samothrace.’ It continues, ‘we will glorify war—the world’s only hygiene—militarism, patriotism, the destructive gesture of freedom-bringers, beautiful ideas worth dying for, and scorn for women.’3 Against the seditious crackles of their motor engines, the Futurists railed against sadness, syntax, monotony, Venice, museums, English art, verisimilitude, the nude, and pasta (‘it induces sluggishness, depression, inertia brought on by nostalgia, and neutralism’). Crucially, they were fighting against the past.

‘Art can be nothing but violence, cruelty and injustice,’ and Futurism’s appetite for destruction knew no bounds: more than half a century before Ballard had written Crash, Marinetti fantasised about the ‘fusion of the machine and the male body; the marriage of the physical aspects of ourselves with the philosophical and technological aspects of our lives,’ a male-body-become-weapon, a ‘nonhuman and mechanical being, constructed for an omnipresent velocity, [that] will be naturally cruel, omniscient, and combative.’ Despite Marinetti’s cult of violence, his protestations, and his machismo (ideologies that led directly to fascism), much of the art that made it off the page was tame and hypocritical, a rehashing of tired and timeworn -isms. 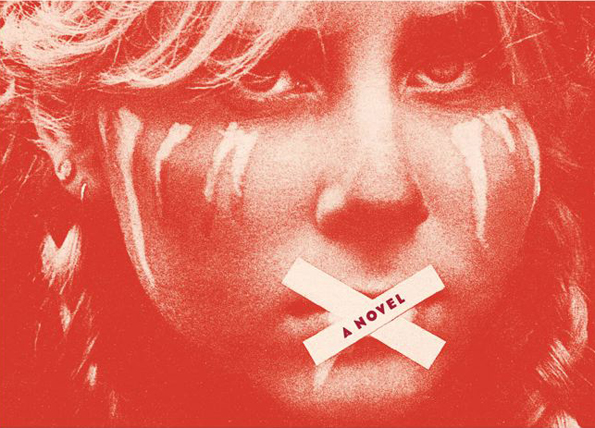 In The Great Dictator (1940), Charlie Chaplin delivers the most impassioned speech against fascism, Nazism and antisemitism: ‘Greed has poisoned men’s souls, has barricaded the world with hate, has goose-stepped us into misery and bloodshed. We have developed speed, but we have shut ourselves in. Machinery that gives abundance has left us in want. Our knowledge has made us cynical. Our cleverness, hard and unkind. We think too much and feel too little. More than machinery we need humanity.’

The first weapons of totalitarian war, as Camus said, were bathed in Spanish blood. The headline of L’Humanité, following the splinter bombing of Gernika on 26 April 1937, read: ‘MILLE BOMBES INCENDAIRES lancées par les avions de Hitler et de Mussolini.’ Picasso reacted instantly, his weapons were paint (he used his brush as a sword, Mailer said), the work a furious protest, almost thirty square metres of canvas covered with scenes of modern mass slaughter faintly disguised behind ancient rituals of death, a silent requiem completed in less than six weeks for the Republican pavilion in the World Fair: ‘The Spanish conflict is reaction’s fight against the people, against freedom. My whole life as an artist has been nothing but one unceasing war against reaction and against the death of art. How could it be thought, even for a moment, that I was in agreement with reaction and evil? […]  In the picture I am now working on and which I shall call Guernica and in all my recent work I clearly express my loathing for the military caste that has plunged Spain into a sea of suffering and death.’

‘Painting,’ Picasso provocatively said, ‘is not done to decorate apartments. It’s an instrument of war for attack and defence against the enemy.’4 Guernica was Picasso’s signal that sounded in the dark. Drawing on threads of the crucifixion, the blood and gore of the corrida, and the figure of the Minotaur, Picasso made a ‘formal virtue out of chaos, to exploit the incredible ruin and inconsequence and purposelessness of the world today by actually breaking things down and making a new order out of the bits.’5 The entire history of art had been trawled for Guernica: an electric lightbulb blazes as an eye; an agonising horse, lanced, its head wrenched high in a last spasm, and under its hoofs the shattered body of a man grasping a broken sword that touches a flower; a horrified woman holds an oil lamp illuminating a dazed, partly naked woman trailing her leg with its huge foot; the head and shoulders of a bull, beneath which a screaming woman squats clasping her dead child, her cries answered by a woman trapped in burning wreckage, a bird shrieks upwards in the darkness from its perch.6

The painting is grisaille, a collage of blacks and whites and greys that harnesses the graphic power of the newsreel and of newspaper print. ‘The gruesome,’ Sontag says in Regarding the Pain of Others, ‘invites us to be either spectators or cowards, unable to look.’ People looked at Guernica.7 ‘Picasso made me tough and quick, and the world,’ Frank O’Hara wrote, ‘…Guernica hollered look out!’ The emotional impact of Guernica on the viewer has never lost its power to shock. Not since Goya has an artist moved the viewer so close to horror. ‘Before the Art of War she laid her babe / To be raffled with the heart of the artist / bulldozed crucified then razed again / to house an outstretched arm / hoof and thigh reins that ran scarlet / streaming the horse’s knotted mane / dripping blood from the wounds of Christ / dripping blood from the wounds of Spain.’8

‘The world I live in is loathsome to me,’ Camus said, ‘but I feel one with the men who suffer in it […] There is another ambition that ought to belong to all writers: to bear witness and shout aloud, every time it is possible, insofar as our talent allows, for those who are enslaved as we are.’

1. ‘The reason I’m painting this way is that I want to be a machine,’ Warhol.↩
2. Kushner’s epigraph in the novel is the D’Annunzian Fac ut ardeat (‘made to burn’), and the flamethrowers are the Italian arditi in the First World War. ‘The flamethrowers could have been from a different century,’ she writes, ‘both brutal and ancient and at the same time horribly modern […] The flamethrower was never, ever defensive. He was pure offensive, overrunning enemy lines. He surged forth, a hulking creature with huge tanks on his back, a giant nozzle in his hand, hooked to the tanks. He was a harbinger of death.’↩
3. Valentine de Saint-Point published her Manifesto of Futurist Woman (1912), and her Futurist Manifesto of Lust appeared the following year. Mina Loy responded to Marinetti with her Feminist Manifesto (1914). Loy also published a satire of Futurist men who saw no conflict between speed and passion: ‘My love is eternal and my train leaves in fifteen minutes.’↩
4. ‘I have the pleasure of making a political statement every day in the middle of New York City.’ Picasso to Rafael Alberti, quoted in Guernica: The Biography of a Twentieth-Century Icon, Gijs van Hensbergen (Bloomsbury 2005)↩
5. Gijs van Hensbergen, ibid↩
6. There has been much discussion, and interpretation, as to the symbolism in Guernica—the horse the Republic, the bull is fascism repelled by the woman with the lamp, herself another version of the girl with the candle in the Minotauromachie, while others reverse the role of the horse and bull—but after the liberation of Paris, the artist told an American soldier that ‘yes, the bull there represents brutality, the horse the people.’ And so, as Patrick O’Brian points out in Picasso (HarperCollins 2003), Picasso’s allegory takes on a universal aspect, a crime not only committed by fascists but by ‘all brutal, evil stupidity in power,’ the painting a ‘huge protest against the universal suffering that it causes,’ death is everywhere.↩
7. Curiously, Richard Serra said: ‘I always saw Guernica as a big cartoon … when you’re young it doesn’t strike you as high art. In that way it’s a precursor of Warhol.’ Richard Serra Sculpture: Forty Years, Kynaston McShine and Lynne Cooke, (MoMA 2007).↩
8. Patti Smith, ‘The Geometry Blinked Ruin Unimaginable,’ Auguries of Innocence (HarperCollins 2008)↩